How To Date A Nerd by Cassie Mae 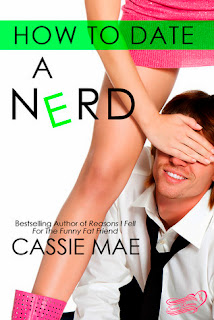 Zoe has a great pair of legs, perky boobs, and wears exactly what she needs to show it all off. She works hard for the easy sleazy ‘you only wish you were me’ reputation, burying who she really is—an all-out nerd.The only time Zoe gets to be herself is when she hides under her comforter to read X-Men comics, sending jealousy stabs at everyone who attends Comic-Con. Keeping up her popular rep is too important, and she’s so damn insecure to care about the consequences. But when Zoe’s sister takes her car for a ‘crash and burn into a tree’ joyride, her parents get her a replacement. A manual. Something she doesn’t know how to operate, but her next door neighbor Zak sure as heck does.Zak’s a geek to the core, shunned by everyone in school for playing Dungeons and Dragons at lunch and wearing “Use the Force” t-shirts. And Zoe’s got it bad for the boy. Only Zak doesn’t want Popular Zoe. He wants Geek Zoe.She has to shove her insecurities and the fear of dropping a few rungs on the social ladder aside to prove to Zak who she really is and who she wants to be… if she can figure it out herself.

Ok let me see if I can put into words HOW MUCH I LOVED THIS BOOK!!!! When I discovered this book it was through Goodreads where another blogger had recently got done reading it and posted a review. I read the title, saw the cover and I was hooked. Then when I read the review I knew I HAD to read it.

How To Date A Nerd is about a girl who is a closet nerd all in the name of staying popular. She had a tough couple of years in middle school, being made fun of and picked on, so she gave up her nerdy ways to become “popular Zoe”. Only she couldn’t give up one thing…her MAJOR crush on her nerdy next door neighbor, Zak. When her sister crashes her car and she gets a new stick shift car, she has to go to Zak for help and finds that her feelings run deeper than she ever thought. She doesn’t know how to fight them any longer. But if she acts on it she risks losing her social status. What can Zoe do? Will she risk her social status or lose Zak all together?

Zoe is such a lovable main character, even when I was mad at her for constantly hurting Zak, her story and character growth are such a touching experience. I rooted for her the whole way and just begged her to make the right choices. Zak is the cutest nerd ever! I’m usually such a bad boy lover, but Zak has made it into my heart. He made me smile SO hard during this book with all his “knight in shining armor” ways. He was there for Zoe way more than she ever deserved. They were also just the extremely adorable together. It was so heart-warming to watch their relationship grow like it did and the things that they went through together.

There are a few side characters that also had a role in some of the things Zoe chose to do. She had two “friends” that I never really cared for. The kind that you could just tell if they knew the true Zoe they would have nothing to do with her. There were also a slew of guys that I just wanted to go away and let Zoe be! Liam was one guy though that I grew quite fond of in his short appearance. There was much more to him than meets the eye. Sierra, her sister, also played a big role in the things going on with Zoe. I was glad to see where their sisterly bond went in the end.


I can NOT express to anyone enough how much this book touched my heart. I think everyone goes through a period in their life where they are insecure and lose their way and themselves. Maybe you become a whole new person, like Zoe does, or maybe you just change a few things about yourself to fit in better. Either way, most people can relate to this book. It is a DEFINITE must read. I cannot wait to get my hands on the next installment in this series about Sierra and Liam. I wanted more Liam so I’m glad we will be getting more of him!!

Email ThisBlogThis!Share to TwitterShare to FacebookShare to Pinterest
Labels: Cassie Mae, How To Date A Nerd, Review