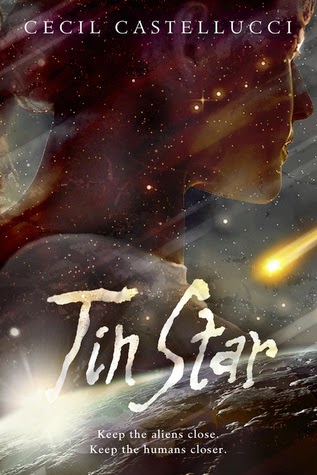 On their way to start a new life, Tula and her family travel on the Prairie Rose, a colony ship headed to a planet in the outer reaches of the galaxy. All is going well until the ship makes a stop at a remote space station, the Yertina Feray, and the colonist's leader, Brother Blue, beats Tula within an inch of her life. An alien, Heckleck, saves her and teaches her the ways of life on the space station.When three humans crash land onto the station, Tula's desire for escape becomes irresistible, and her desire for companionship becomes unavoidable. But just as Tula begins to concoct a plan to get off the space station and kill Brother Blue, everything goes awry, and suddenly romance is the farthest thing from her mind.

Let me start by saying I have been putting off this book for a few months now because I have seen so many mixed review and I am so picky when it comes to science fiction genre. Now that I have read it I wish I would have read it sooner. TIN STAR definitely took me by surprise.

Tula is the only human left aboard the ship, Yertina Feray after being betrayed by Brother Blue. Even left in this place where she is so uncomfortable she is able to hold her own. She bonds with Heckleck, an alien living in the undergutts of the ship where she is staying, and quickly figures out how to make her life work on the ship. She also finds herself with a bond to Tournour, who is a higher ranking alien on the ship. I love how strong she is throughout the story and she doesn't break down and complain about it. Tula does what needs to be done no matter what.

The pacing of the story is slower than I'm used to but the writing is so beautiful that it didn't honestly bother me. I also felt that the first half NEEDed to be paced that way. There is also a lot of telling rather than showing of certain things in the story but once again the writing made it so detailed and it just worked. I was quickly taken in by TIN STAR.

When 3 other humans (Reza, Caleb, Els) eventually come aboard the ship, Tula is very wary of them and I thought that was really smart. I really didn't feel much attachment to any of them for the most part. I instantly didn't like Els, and the boys just didn't interest me at all. The small bit of romance that does happen within the human group in this book bothered me. I didn't really care for that part of the story, it fit somewhat, but just wasn't a fan of it.

The second half of the book definitely picked up pace and a lot happened. When some of the truth comes out about Brother Blue I wasn't completely shocked, they were things I had suspicions about but it was still entertaining to see how he was doing it. Tournour's role in everything definitely made me smile and he quickly became one of my favorite characters in this book along with Heckleck and Tula.

I definitely plan on ordering a copy of TIN STAR for myself and will be reading the next installment coming out in Feb 2015. I recommend for fans of THE HOST.