Death Is But A Dream by Erin Hayes Blog Tour: Excerpt and Giveaway

Death Is But A Dream 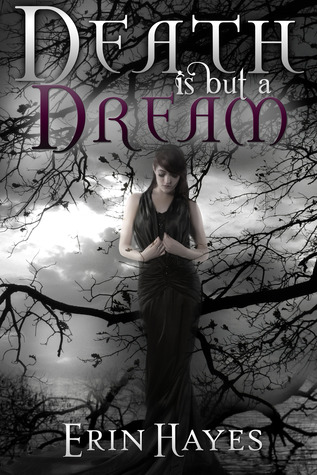 Caught between life and death, all Callie wants is to live again.Homicide detective Callie Saunders knows that death isn’t all pearly gates and angels. After being hit by a bus, she finds that it's the ancient gods and goddesses of Greek mythology who are in charge of everything.So when Hades offers her a deal, she accepts. If she wants to be brought back to life, she’ll have to figure out who is trying to kill his son. But if she fails, both her soul and the world will be destroyed.With the odds mounting against her, it’ll take everything she has within her to wake up from death. But the rules are constantly changing. And someone wants her to stay dead.

“Don’t look so uncomfortable, Callista,” he chided. He gestured to a chair in front of the desk. “Here, have a seat.”
“It’s Callie,” I told him.
“Callie then,” Hades corrected himself. “Have a seat, Callie.”
Before I had the chance to reconsider, I quickly sat down on the chair—which happened to be the most comfortable seat I had ever sat on—and I perched to attention.
With a wave of his hand, Hades produced a tablet, which he flicked through with detachment.
“Callista...Callie...Saunders. Twenty-seven years old. Graduated first in her class at the University of Pennsylvania. Degree earned: a Bachelor’s of Science in Criminal Justice. Joined the police force at San Francisco PD for two years before becoming a police detective.”
He rattled off my credentials. I closed my eyes, wondering how much information was in that tablet of his. I suspected lots.
This felt a whole lot like a job interview. My gut instinct told me that, in a way, it was. And my gut instinct was rarely wrong.
Why the hell was I having a job interview?
“In three years, you’ve earned quite a few awards for your work,” Hades went on. “You’ve solved many murder cases, even stopped a few from happening. You’re devoted to your job, and you’re very good at it. You're highly recommended by your colleagues. You’re an excellent marksman. A black belt in Tae Kwon Do and a brown belt in Brazilian jiu-jitsu. You spend most of your spare time on side cases, and you especially are trying to bring down underworld Kingpins, like one Stephen Cross, for which your boss suspended you once.”
I flushed deeply. That part wasn't my fault. And if no one believed me that the underworld mob bosses were a big problem, then I was going to have to bring them down myself. Granted, many would have argued that I had been too involved in that case.
Hades continued. “And you have a deeply seated sense of right and wrong. You have no roommates, you live alone. Survived by your mother, Kathleen McCormick, and your stepfather Seth McCormick.” He flicked through another page. “And you recently broke up with your boyfriend of four years just two months ago.”
My eyes widened at the mention of Ben. “That last part is my own personal business,” I snapped.
“Hit a nerve, have I?” He seemed amused.
“I don’t see what any of this has to do with me being dead.”
Hades’ eyes sparkled. He said something in all seriousness that I had never thought I’d hear spoken out loud before. “Dead, no. Mostly dead, yes.”
My heart thudded heavily in my chest. “What?”
He feigned disinterest as he flicked through the tablet. “You threw yourself in front of a bus to save a little girl. Now the little girl is alive, when she was meant to die. And you...” he grinned down at me, “you’re in a very deep coma at UCSF Medical Center.”
The news hit me like a ton of bricks. My knuckles were white and the room suddenly felt very hot. “I’m...I’m alive?” I looked down at my hands in disbelief and held them up to the light to inspect them.
No wonder everyone was treating me strangely. I was different. I was still alive.
Hades nodded somberly. “For the moment, yes.”
I gaped at him. “For the moment?” That sounded like a threat.
“You see, you weren’t supposed to save that girl, Callie. She was meant to die. To become the martyr behind a movement towards stricter punishment for reckless driving. It would have saved many lives down the line.”
I swallowed. My throat felt dry. No matter what he said, I wouldn’t regret saving that girl. In my final moments before waking up here, I knew I would never regret that decision, yet it still felt awkward to hear all of this.
“Because of that change of plans, I have a whole bunch of paperwork to fill out, you see. And there’s a spot in the Underworld that you’re currently occupying. I could have you fill her place and take elements from your future to put on hers and vice versa. It would make my life so much easier. Unless...” His voice trailed off and he looked at me expectantly.
He wanted me to jump on that word, thinking that I would demand to know what I could do to get me back to Life. I didn’t rise to the bait. This whole thing smelled fishy, and the thought of it was pissing me off.
“You’re blackmailing me,” I sneered at him, fury raging within me at the realization. “You want me to do something in return before you allow me to wake up.”
I hated corruption and I hated being manipulated, both of which Hades was doing to me right now.


He raised his hand in a gesture of supplication. “Not blackmail,” he assured. “I’m looking to employ you for a time.”

Giveaway:
(NOTE: This giveaway is sponsored through Xpresso Book Tours by the author, I am not responsible for any unsent items.)

a Rafflecopter giveaway
Posted by Unknown at 8:47 AM