**I received Rebel Springs through Penguins First Reads Program in exchange for an honest review.

***SPOILER ALERT IF YOU HAVE NOT READ FALLING KINGDOMS*** 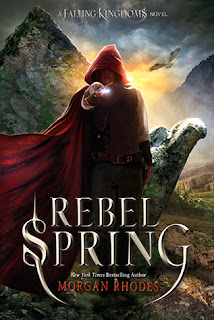 Love, power, and magic collide with war in the second book of the Falling Kingdoms seriesAuranos has fallen and the three kingdoms—Auranos, Limeros, and Paelsia—are now united as one country called Mytica. But still, magic beckons, and with it the chance to rule not just Mytica, but the world...When the evil King Gaius announces that a road is to be built into the Forbidden Mountains, formally linking all of Mytica together, he sets off a chain of events that will forever change the face of this land, forcing Cleo the dethroned princess, Magnus the reluctant heir, Lucia the haunted sorceress, and Jonas the desperate rebel to take steps they never could have imagined.

I had heard about the series and really wanted to read it. I haven’t read a lot of high fantasy so this is truly a newer genre for me. I absolutely adored the first installment, Falling Kingdoms, and was so glad I had this already to dive right into.

Rebel Springs picks up where Falling Kingdoms left off, King Gaius is ruler over Mytica and all of the people from the three lands—Auranos, Limeros, and Paelsia. While King Gauis is set on completing his road across the land in search of the one thing that he thinks will give him the ultimate power. While Magnus is searching for the same thing so he can be equal to Lucia. Cleo is still being kept in the castle against her will and to play as a pawn in the Kings grand plan. Jonas is out rallying the resistance in hopes of taking down the Blood King.

I truly enjoyed this book almost as much as the first one. I enjoyed seeing how much Cleo grew throughout this book and how she stood her ground for a change. She is easily my favorite character of the bunch. Magnus disappointed me frequently throughout the book but I still have hopes that he will redeem himself in the final installment. He is not a bad guy; he just isn’t going down the right path. I still haven’t decided how I feel about Lucia yet. Sometimes I found myself really loving her, other times I wanted to strangle her because she was acting like a brat. I enjoyed seeing a bit of Nic in this book and thought he was a really admirable character. I think he will play a bigger role in the next book which I am excited to see. Next to the Blood King, I think I despised Aron the most and am really glad to see the turn of events that came with his character. I became a bit attached to Jonas in this book. I really wanted for him to come out on top and I’m still rooting for him.

The plot was fast paced and held my attention well. There were several things that I never saw coming, especially the deaths. This is definitely a free-for-all book, and don’t think for a second that someone just CAN’T die, because they probably can…and just possibly might. It’s definitely and action packed book.

With all the things I adored about this book I did hit a couple of snags. I felt there were way too many point of views. I’m a HUGE fan of different point of views…but this one was just too much for me. It was harder to connect as well with the characters and then I didn’t care too much for being in the head of some newer, less known characters. I assume the newer ones will be important in the next book, but it still was hard for me to enjoy them in this book. I would have rather stayed with my original people. Also while in discussion with a blogger friend I realized one of the things nagging me was the fact that this book did not really have its own story, it was a continuation of the first one. None of these things ruined the book for me, so they were just small snags.

If you enjoyed Falling Kingdoms I think you will definitely enjoy Rebel Springs. I can’t wait for the final book to come out; I will definitely be picking it up to read.