It's no secret how much I absolutely LOVE Erin Rhew's first installment in this trilogy, THE PROPHECY, so I'm really excited to be part of the blog tour for its sequel, THE OUTLANDERS. While I have been crazy busy I knew I wouldn't be able to do a review post in time for the tour so I asked Erin to do something extra fun for the blog!

**As always, when posting about a sequel, keep in mind there could be possible spoilers if you haven't read book one** 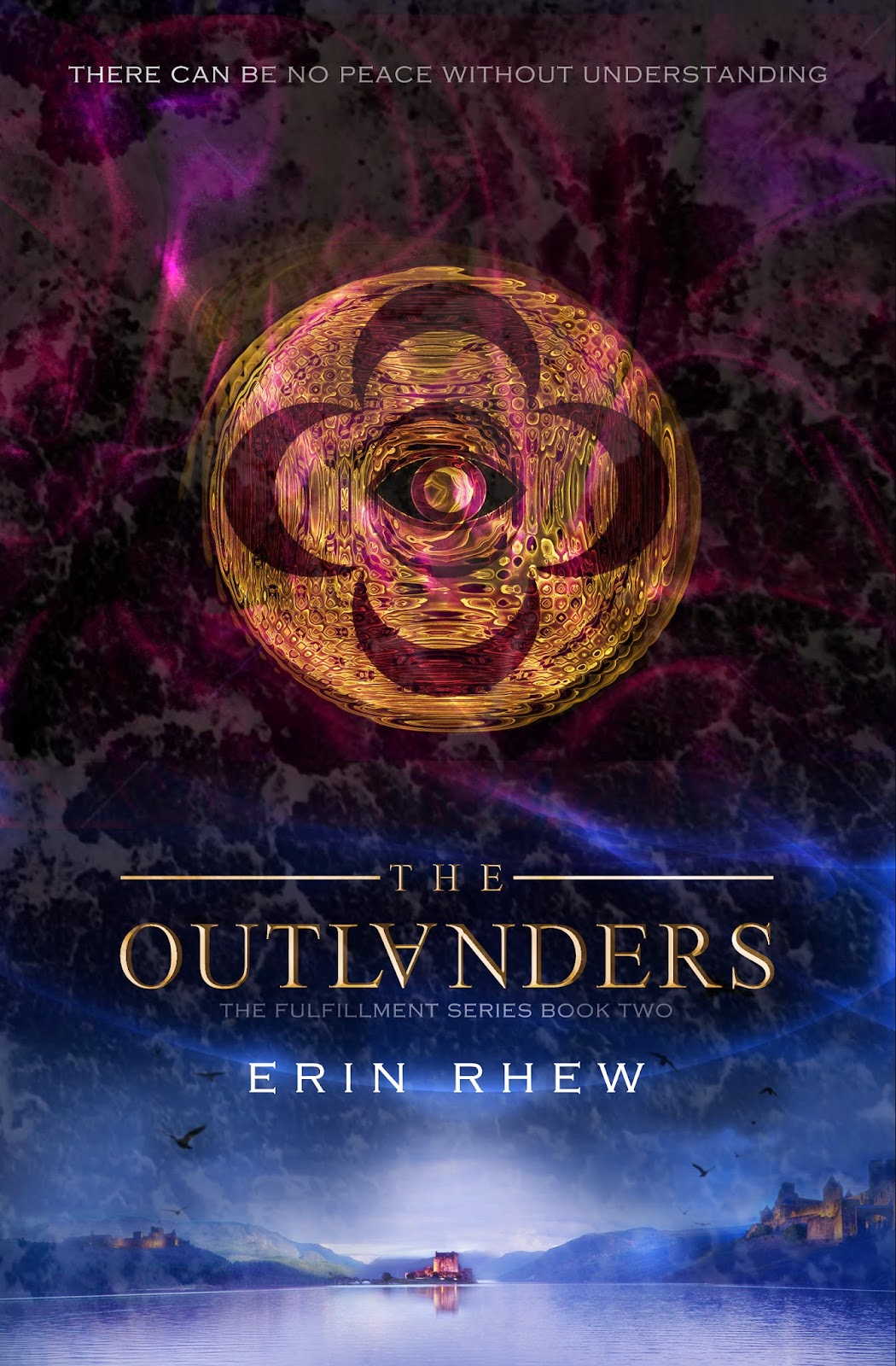 With King Jesper dead and Prince Wilhelm mortally wounded, Halfling prince, Nash, and the Fulfilment, Layla, assume the throne of Etherea. They must contend with a new Prophecy Candidate who asserts her position, and Layla is surprised to find her fate intertwined with this challenger. Facing a myriad of choices, Nash and Layla’s decisions affect not only their own futures but that of two kingdoms.
Unbeknownst to the Ethereals or the Vanguards, a slumbering menace stirs in the south, awakened after centuries of slumber. The mysterious Outlanders, a force shadowed in mystery, sit poised to tip the balance of power, sending ripples of fear throughout both warring kingdoms.
Elder Werrick proved a formidable foe, but Layla may yet meet her match in the monstrous Outlander queen. This mistress of the dark’s plans, rooted in revenge and ancient lore, now threaten the livelihood of all three kingdoms.

Racing against time, Layla travels to the Borderlands—home of the Voltons and Ecclesiastics—to discover as much as she can about the war, the First Ones, and the prophecy itself. Lives teeter in the balance, kingdoms sit on the cusp of ruin, and a beast, greater than any she’s ever faced before, plots a catastrophic attack.

Now there is a sort of, kind of, a triangle type thingy in this trilogy. I'm personally a huge fan of triangles, if written well, so they never bother me. I will say though that this is NOT you run of the mill triangle. There are certain...umm mystical, magical twists to this particular romantic triangle.

Now PERSONALLY I'm a Nash gal. He's the perfect bruiting, tortured soul, but has a good heart male specimen, so of course he caught my eye. ;D For all the obvious, fun reasons I asked Erin to do us up a little fun "Prince Showdown". THANKS ERIN!!!!

Crystal, you totally rock! Let’s all give her a virtual round of applause!! She’s a huge supporter of books and authors, and I just love her to pieces! Thank you so much for hosting me, girlie!!

Today, Crystal asked me to talk about Wil versus Nash. I’m sure you all know she’s Team Nash. She even has their ship name picked out: Crash! ;) But I know there are Team Wil fans out there too!

The more I talked to my Dream Team and Deek about this post, the more we realized Nash and Wil have a lot of the same characteristics. They just use them differently and for different purposes.

How do you compare two people? That's what we struggled with. People are so subjective, and their lists of positives and negatives are not binary.

What about loyalty? Wil is clearly loyal to his people, his family, and his friends. He is a king and tries to be a righteous one. He wants the best for all and tries to be fair and just. Nash claims to not be loyal to anyone but himself. Yet, behind these words lies a man whose heart beats of dedication. When he assumes the throne, he tries to lead in the way that he feels Wil would lead. His friends and family come before all others. Wil literally gives his life for what he believes in. But Nash too would die for those he loves.

What about intelligence? Nash is cunning and street smart. His ability to survive in chaotic and dangerous situations exceeds that of his brother. In a formal setting, he is passable, bordering on capable, though quite uncomfortable. Wil, on the other hand, feels at home in court and in formal, regal settings. He could sit at a table with any leader or diplomat from any land and excel. Does that make either of them smarter than the other? No. They are just intelligent and cunning in different ways.

Doing the right thing. Each man wants to do the right thing, but they see completely different paths to get there. Wil sees diplomacy and reason as the means to an end. At least, that is his first instinct. Pushed, he will fight, but that is not his preferred method of dealing with differing of opinions. Nash sees diplomacy as a formality that gets in the way of getting stuff done. Usually he just wants to get in and get right to the heart of the matter, even if it seems rash or foolish. Each method is effective. Though within each situation, the results may vary.

Instincts. Wil has great instincts...when it comes to running the kingdom. He has the ability to find a unique, generally peaceful solution to a problem. Clever and wise in a diplomatic situation. Nash also has natural instincts. He could survive in the wild on his own indefinitely and could plan a battle on his gut rather than on numbers and tactics. He is more apt to "feel" his way through a problem rather than rationalize it out.

Selflessness. Each man is willing to give up his life for what he believes in. Each would die for those he loves without hesitation.

Mannerisms. Wil is far more chivalrous than Nash, skills which serve a future king well in court. He would find a diplomatic ways to convey information while Nash would simply state it plainly.

Who are they? Wil knows exactly who he is—son to a king and heir to the throne. He was born to be king. Nash was born out of place. While he has the inner-strength to be king, that particular seat doesn't fit him, and he knows it. Hence he is so reluctant to lead and feels so out of place doing so.

So, take all that information, put it together, and what do we have?

Wil is the sensitive, strong leader who typically does not let his emotions get in the way.  He was raised with the all the love and blessing from his father, which Nash was denied.  He was raised as the crowned prince and learned how to be Etherea's leader.  Thankfully, he is a much better and stronger man than his father.  Layla has brought out a whole new side of him, and he likes who he is when he is with her.  He loves his country and values it above his own life (sacrificial).  At this point, he loves Layla so deeply but is willing to let her go for her own happiness as he thinks she is in love with Nash.

Nash is a loner who has never felt like he belongs anywhere so he has been drifting.  In his drifting, he is discovering his own values, not what has been told to him.  He knows who he is and who he isn't.  He is a reluctant interim king which he only accepted because of his great love and loyalty for his brother, not so much his country.  Loving Layla makes him feel like he is part of something bigger than he ever thought possible.  Despite his "approval" from Wil to be with Layla, he still can't be with her because he loves Wil too much to ever hurt him that way.

Both men have similar hearts.  They both love and value certain things and are willing to sacrifice everything for those things.  They both love their mom and sister, which says a lot about how kind they can be.  They love and admire each other deeply.  I think that if you asked them who is their most influential person, they would probably say each other.  I think that they both make each other better because of their differences while still having admiration for the other.  They also share a love for Layla- which is odd because you would think these two different brothers would fall for different girls.  Layla brings out the best in both of them but also causes them both extreme pain.

SO I hear all these things about Wil and I even agree with them, BUT I'm still team NASH! What team are you?

Don't forget to enter this awesome giveaway that Erin has provided and to leave her some love!!!


a Rafflecopter giveaway
Posted by Unknown at 9:34 AM 1 comment: