My Not So Super Sweet Life by Rachel Harris Review + Giveaway

**Thank you EntangledTeen for providing me with an eARC in exchange for an honest review. 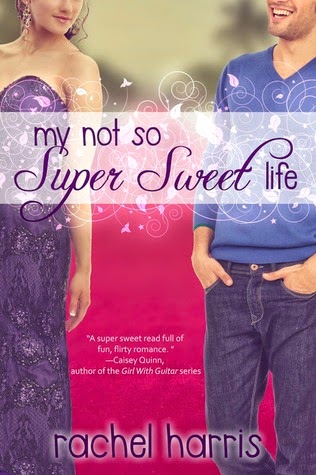 Cat Crawford just wants to be normal—or at least as normal as a daughter of Hollywood royalty can be. And it looks like fate is granting her wish: she’s got an amazing boyfriend, Lucas; her fabulous cousin, Alessandra, living with her; and her dad planning his second marriage to a great future stepmom. That is, until her prodigal mother reveals on national television that she has something important to tell her daughter…causing a media frenzy.Lucas Capelli knows his fate is to be with Cat, and he’s worked hard to win her over once and for all. Unfortunately, Lucas has his own issues to deal with, including a scandal that could take him away from the first place he’s truly belonged.As secrets are revealed, rumors explode, and the world watches, Cat and Lucas discover it’s not fate they have to fight if they want to stay together…this time, it’s their own insecurities.Well, and the stalkerazzi.

Y'all I don't know if you have ever read anything by Rachel Harris, but seriously she is like a writing goddess. There has not been on book of hers that has not left me with this HUGE, goofy grin on my face at the end, and I'm here to tell you that MNSSSL was no different. I have followed Cat through her journey in MY SUPER SWEET SIXTEENTH CENTURY and A TALE OF TWO CENTURIES, this book ended her journey so fantabulous!

Lets start with the feels!!!! Oh there were SO SO many feels! Lucas happened to be the main cause of them. I have always been a huge fan of Lorenzo (from MSSSC), but sorry Lucas just pushed Lorenzo down a margin for me. I mean EIGHT-PETAL ROSE!!!!!! Need I say more ladies?? Ooohhh OR the Princess Diaries moment.....I mean where was this guy when I was 16/17??? Even looking past all the swoony things he did for Cat the fact of how he was there for her and fights so hard for her through out the entire book, you just can't not love this guy!

Oh and speaking of swoony guys, ladies Austin Michaels does make a few appearances....and I mean he's Austin....there's all sorts of grinning at your eReader and your significant other looking at you like you have lost your dang mind....but any who ;-)

Besides all the swoony, guy driven feels, we get to see Cat really open up in this book and go through some heavy emotional stuff, and I would be lying if I didn't tell you that I got teary eyed a few times, and even shed a tear or two over some scenes. I just can't help but feel like this stuff is happening to my best friend with the way Harris' writing completely draws me into this world, I seriously just can't!

I enjoyed really getting to see more interaction with Cat and Jenna in this book also. There are just some really awesome moments between these two that I think a lot of people will really be able to relate to.

AND let's get back to the guys for a moment....because I mean....RANSOM!!!!!! I've already told Rachel, and I will tell you all I NEED A BOOK ABOUT THIS GUY LIKE I NEED THE AIR I BREATHE!!!! I mean he walks around in all his "I'm a guitarist hottness, but totally have a soft side" and and and YUM! Now y'all don't know Ransom yet, but you will, and you will be demanding the same, I swear it!!!

As for Reyna, I hope to see her again someday, I really do. She came meddling in a lot of people's lives and I enjoyed every second of it!

Now if you aren't sure what I'm trying to say in this super sporadic gushy review.....it's this: YOU SHOULD SERIOUSLY READ THIS BOOK!!!!!

*13 yrs or older to enter
*Entries will be checked, if found cheating all entries will be removed
*You have 24 hr to respond to winner email before someone else is chosen (you will have until Sunday, April 21 at Midnight to respond for this prize)
♥ GOOD LUCK ♥

a Rafflecopter giveaway
Posted by Unknown at 8:38 AM

Email ThisBlogThis!Share to TwitterShare to FacebookShare to Pinterest
Labels: Entangled Teen, My Not So Super Sweet Life, Rachel Harris, Review