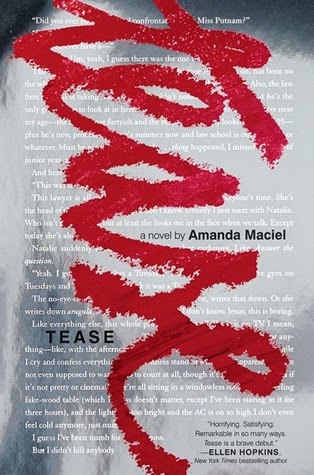 From debut author Amanda Maciel comes a provocative and unforgettable novel, inspired by real-life incidents, about a teenage girl who faces criminal charges for bullying after a classmate commits suicide.Emma Putnam is dead, and it's all Sara Wharton's fault. At least, that's what everyone seems to think. Sara, along with her best friend and three other classmates, has been criminally charged for the bullying and harassment that led to Emma's shocking suicide. Now Sara is the one who's ostracized, already guilty according to her peers, the community, and the media. In the summer before her senior year, in between meetings with lawyers and a court-recommended therapist, Sara is forced to reflect on the events that brought her to this moment—and ultimately consider her own role in an undeniable tragedy. And she'll have to find a way to move forward, even when it feels like her own life is over.

My first thought after reading this book...and honestly the whole time reading this book was "is this seriously how high school kids treat each other now??” I know that bullying happens, and maybe it's because I'm from a small town and a whole lot doesn't happen here BUT this book honestly terrifies me for my kid's sakes. I never want my kid to be like Brielle or Sara, or even like Emma. It is such a heartbreaking story.

TEASE really turns the tables by telling the story from the bully's perspective versus the victims, which is more common in books. While I really hated the majority of the things Sara did and the way she handled things they still didn't make me completely hate her. I honestly felt like if she wasn't friends with Brielle she would have been a good kid, not that this is a valid excuse for her, but it's the truth. They had a highly poisonous friendship and Brielle was definitely the poison. I even felt like Sara and Emma could have been friends if it hadn't been for certain influences, and Emma even tries to point this out in her own way.

This book was really an emotional one. I think anyone having experienced bullying might even find it hard to read if it hit them personally. You can really sympathize with Emma throughout the book and see even from Sara's eyes that something was truly hurting this girl, even outside of the bullying. I do wish that I could have found out Emma's story. I think she had things going on in her home life; I want to know why she transferred schools, and what the deal with her step-dad was. Here's hoping for a novella maybe.

The guys in this book (besides Carmichael); let’s just say I hope my daughter never likes one like these. I found Dylan to be such a creep. In my opinion he was after one thing with Sara to start with then he does all the things that cause more issues between her and Emma. I wanted to shake Sara when she kept talking to him after everything that happened. Just because Dylan didn't bully Emma, it didn't make him a good guy like he was somewhat portrayed at different times. He was a jerk. Plain and simple.

And teen girls are guys seriously like these in this book?? If so I'm just locking my daughter up now. Seriously, ugh.

Carmichael was a breath of fresh air when it came to characters in this book. For some unknown crazy reason he was nice to Sara when no one else was. Sara quickly became an outcast but he was a great friend to her and a genuinely nice guy. I wouldn't mind seeing more of him either.

Overall I liked this book. I think it is a real eye opener to how bullying can get really out of hand now and how kids really don't think when they do these things. Consequences happen when people get hurt physically, emotionally, or mentally and I think people tend to forget this because at the time they are just making themselves feel good, and I think being in Sara's head really showed how easily it is to get caught up in that kind of atmosphere. I would definitely recommend picking it up but just know this isn't a book meant to give you the warm and fuzzies and it won't make you want the characters as your BFF.

Have you read TEASE? What were your thoughts?
Posted by Unknown at 12:00 AM