While I wasn't a fan of this book (see review soon), I wanted to have another opinion on here because I noticed so many mixed opinions for this specific title.Thanks so much to Nikki from Fiction Freak for guest reviewing Trial by Fire. 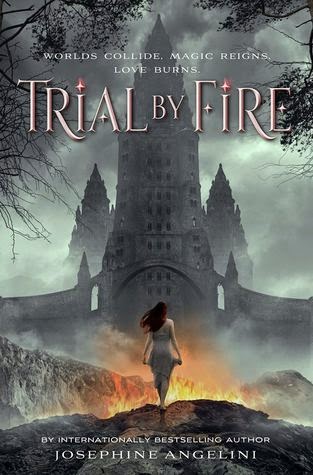 
This world is trying to kill Lily Proctor. Her life-threatening allergies keep her from enjoying experiences that others in her hometown of Salem take for granted, which is why she is determined to enjoy her first high school party with her best friend and longtime crush, Tristan. But after a humiliating incident in front of half her graduating class, Lily wishes she could just disappear.Suddenly, Lily is in a different Salem—one overrun with horrifying creatures and ruled by powerful women called Crucibles. Strongest and cruelest of them all is Lillian . . . Lily's other self in this alternate universe.What makes Lily weak at home is what makes her extraordinary in New Salem. In this confusing world, Lily is torn between responsibilities she can't hope to shoulder alone and a love she never expected.


I was a huge fan of Josephine Angelini's STARCROSSED (Angelini was actually one of the first authors I ever interviewed on my blog! I'm as surprised as you are.), but I read it pre-blogging. And we all know that those pre-blogging books aren't always the greatest. So when a few mixed reviews came in I was worried. Would Trial By Fire live up to my expectations? Would I love it like some did or hate it like others?

The book was intriguing right from the beginning, I'll give it that. Lily was an interesting character and she endeared herself to me right from the start. She was a bit quirky and hilarious and while she never was one of those happy-go-lucky kinds of characters, she did make the best of things when she could and I loved her for that.

Aside from that though, you have to be sympathetic by her situation--she's allergic to almost everything. And I'm not even exaggerating. From mold to potatoes to alcohol to hairspray, I'm honestly surprised she managed to survive (ignoring the fact that this is a work of fiction.) but as terrible as it is, it's a bit compelling since we know from the synopsis that her allergies give her some kind of power. We're just not sure how.

The world is absolutely mesmerizing and fantastic. Angelini is an absolute genius with the world and I'm thoroughly stunned by the world building, the logistics of witches and crucibles, mechanics and Salem itself. The world is rife with it's own history and parallels to our world and it's culture, while similar, has many differences that marks it as other and while the differences are small, they manage to weave into a complex world with a complex history and it's own unique systems. The willstones were absolutely fascinating and I loved learning about them and...well, everything. There was so much research that went into this novel that I'm thoroughly impressed. There's a logical reason for everything, from why salt is one of the most important things for a witch, to what in potatoes made Lily sick. (Also, a fascinating part about why pee was rubbed into Lily's hair. That part made my day.)

Rowan. He was strange. And I loved him. He starts out absolutely hating Lily and I could definitely understand why, but he honestly just seemed to fit the trope for the bad boy love interest. I'm not saying that he still doesn't fit that trope but we learn quickly that he's actually a pretty heartfelt and spectacular character--who can't love him, honestly.

But dear god his and Lily's relationship was a huge mess. Was Lily in love with Tristan in reality? Is it some strange love triangle? When, exactly did Lily fallin love with Rowan because it seems like the feelings popped up overnight. Then the two of them would get into a fight over a misunderstanding like a couple of other YA couples I could name instantly.

Here's where it gets a little more tricky: The plot. Did I love it? Did I not? I have no idea. The majority of the book was Lily being dragged around everywhere and learning about the world so while there was barely any action happening, the world sort of made up for it. The fact that there was a war brewing behind the scenes made everything the more intriguing, especially since you knew that Lillian and a few other characters had to tread carefully (political intrigue will always win me over, no matter how little it is.) upped my excitement, but the slowed pace just dulled it back down.

I'll have to admit though, despite my complaints Trial By Fire was a fantastic read. It's an enchanting read with a compelling world and a snarky main character who I didn't get bored of. Paranormal fans are going to love this take on witches with just a little bit of sci-fi thrown into the worldfoam.

(Thanks to Feiwel and Friends for providing me with this ARC)