The Raven Cycle #1 and #2 by Maggie Stiefvater 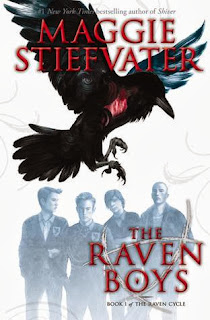 An all-new series from the masterful, #1 New York Times bestselling author Maggie Stiefvater!
"There are only two reasons a non-seer would see a spirit on St. Mark's Eve," Neeve said. "Either you're his true love . . . or you killed him."It is freezing in the churchyard, even before the dead arrive.Every year, Blue Sargent stands next to her clairvoyant mother as the soon-to-be dead walk past. Blue herself never sees them-not until this year, when a boy emerges from the dark and speaks directly to her.His name is Gansey, and Blue soon discovers that he is a rich student at Aglionby, the local private school. Blue has a policy of staying away from Aglionby boys. Known as Raven Boys, they can only mean trouble.But Blue is drawn to Gansey, in a way she can't entirely explain. He has it all-family money, good looks, devoted friends-but he's looking for much more than that. He is on a quest that has encompassed three other Raven Boys

No one can deny that Maggie Stiefvater has a unique writing style. This is my first book I have read by her. I know I saw plenty of reviews that did not care for it, personally I enjoyed it. She has a way of telling a story with out it needing to be fast paced, with action in every scene but could still keep my attention. The way that all the descriptions and personalities of the characters were written was beautiful. I found myself rather attached to the misfit group of Raven Boys and Blue's eccentric family.

When I first started reading this book from the synopsis I assumed that it would be mainly focused on the fact that Blue could not kiss her true love without him dying. While that seemed a very intriguing story line to me, I was pleasantly surprised when I found that the book focuses more on the boys relationships and how Blue becomes a part of their group. I got to know all about their lives and about Blue and her psychic family. There were very few scenes that focused on Blue and any boy, but when it did it definitely was not forced or any type of insta-love. I also enjoyed how the setting was in this time but it also felt that it was in an older era at the same time. I think that is just part of the reason why I love Maggie's writing style.

Blue for her young age is a highly sensible girl. She had a great head on her shoulders and always seemed to think her actions through. It's possible that when you come from a household of psychics that happens. LOL Gansey I found even with his young age, he seemed to have an old soul, which I thoroughly enjoyed. He is definitely different that any of your normal YA male leads. Adam was an amazing "I take care of myself" kind of guy that I at times had my heart broken over his home life and all his trials and tribulations. Ronan was actually my favorite out of the Raven Boys, he comes off as really harsh but I could tell he had a secret that would eventually come to light. The scene where he is with Adam at his home (I will not go into more detail as not to spoil anything) made me so proud of Ronan and proved my thoughts of him through the entire book. Noah, the most quiet of them all, definitely has his own story to tell and it definitely was a shock.

The only issue that I ever really had with this book was was the ending. I did not like it at all, apart from a secret that Ronan confesses. It felt to rushed to me and like it left a lot of loose ends. It was still a completely amazing book. I definitely recommend it. Be warned though....this is not a book that you can sit down and read quickly. I think there is a lot of information to absorb, but it is worth it.


** I received this book from Netgalley in exchange for my honest opinion. 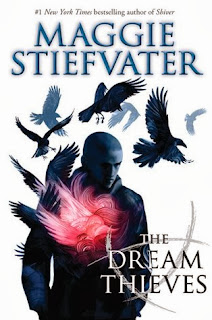 Now that the ley lines around Cabeswater have been woken, nothing for Ronan, Gansey, Blue, and Adam will be the same. Ronan, for one, is falling more and more deeply into his dreams, and his dreams are intruding more and more into waking life. Meanwhile, some very sinister people are looking for some of the same pieces of the Cabeswater puzzle that Gansey is after..

After I read The Raven Boys, I immediately started reading this book. I was so ready to see what happened with Adam since he sacrificed himself to wake the ley line and curious to see where his "relationship" with Blue would go. (Especially since I'm rooting for Gansey.)

The book started off pretty well for me. It definitely focused more on Ronan and the fact that he can withdraw things from his dreams. I loved finding out more about Ronan and his back story, since he is my favorite. It was really interesting to find out why he is the way he is, and why Gansey feels the need to protect him so much. This book however did NOT make my feelings for Declan change. I still can't stand that guy.

I was excited to see Noah was still a good part of the book since we found out in the last one that he was actually dead the entire time. He ends up being a pretty good "voice of reason" for Blue and Ronan. I love how protective Ronan has been over Noah in the first book and in this one. Noah is there for Ronan when he needs people the most. His dreams start to cause some really strange and scary events in his life that he has to figure out.

There were plenty of new shady characters that come into this book. One that turned out to win me over was Mr. Gray. He is a hit man who comes to town in search of something that he doesn't even know for sure what it is and finds himself a part of Maura's life, and caught in the middle of the group of Raven Boys and some of the predicaments they have found themselves in.

Adam has his own troubles in this book that stem from his home life in The Raven Boys and the fact that he sacrificed himself the way that he did. I enjoyed seeing the way things went with him and how he came to figure out what he should do for himself throughout the story.

While Adam is figuring his stuff out, I do see Gansey and Blue getting a little closer. This book is still not overshadowed with romance but I did like some of the scenes with Gansey and Blue and seeing that spark that you just couldn't miss in The Raven Boys come more into play.

My one issue with this book was the fact that I felt like finding Glendower (which was one of the main story line in book 1) was pretty much put on the back burner. I don't feel like this book got anywhere new with it really. I'm pretty sure that it was set up this way because Ronan's gift is an intricate part of how to get to Glendower, but I feel like that part of the story was brought up several times but it just never went anywhere. I did find myself getting a little bored in the middle part of the book. It did pick back up though and it sure wasn't enough to make me put it down. I will be patiently waiting for book 3 in hopes of seeing where Blue and Gansey go with their relationship, or lack there of. I'm also ready to see if they ever find Glendower.