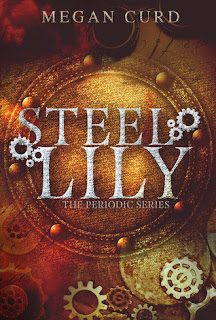 AVERY PIKE is a commodity. No, more than a commodity. Her existence is guarded at all costs.She’s a water Elementalist, the strongest of her dwindling kind. She creates steam to provide energy to fuel Dome Four: the only thing standing between humanity and an earth ravaged by World War III. No steam, no Dome. No Dome, no life.Or so she thinks.That is, until a mysterious man offers her a way out of having to donate steam. A way to escape the corrupt government of Dome Four. While the offer seems too good to be true, Avery is intrigued. But when she arrives to her new home, she realizes the grass isn’t any less dead on this side of the fence. Instead, the lies are just hidden better.…Which means digging deeper.When Avery enlists the help of her friends to uncover the truth, she learns that while some secrets are better left concealed, humankind was never meant to live in a cage. And when you can control the most sought after resource, you can learn to control anything…including the fate of your world.

I'm in love with dystopian novels, plain and simple. So when I saw the synopsis for Megan Curd's Steel Lily I knew I had to get my hands on it. Let me tell you, it did not disappoint. I was so excited when I got this book that I squeezed it in between other review books just because I couldn't stand the wait. The characters were awesome. The lead female was tough, snarky, and kick butt! There was a tough, hot swoon-worthy male lead, and some awesome best friends. Then you throw in the awesome elemental uses: AMAZING READ. :)

"My ability to manipulate water-to create steam-manifested after I was exposed to the radiation." -Megan Curd, Steel Lily

Avery Pike used to live in a normal world with her family until a nuclear bomb exploded and everyone was exposed to radiation. Now she resides in Dome Four and has the power to produce steam. Not only does she have this power, but she is the strongest elementalist in Dome Four and provides most of the power for it to run. Avery was separated from her parents and do not know if they are dead or alive.

"The war had polarized everyone into two classes. There were Traditionals: people who were normal by all accounts and expendable, and there were Elites: members of the government, the rich, or Elementalists. Elites were pampered; Traditionals were lucky to survive. I hated being considered Elite." -Megan Curd, Steel Lily

Even though Avery's life would be looked at as good living in Dome Four, she hated it. She was used by her teachers, the Polatzi, and the government. When she comes across a strange man, Mr. Riggs, she is offered a way out of Dome Four and what seems to be a better life. Riggs wants to take her to his academy, Chromelius Academy, that is dedicated to elementalists to help broaden their skills. When Avery goes to talk to Alice, her best friend, about Riggs showing up with this offer, the decision is made for her when Jaxon Pierce appears and takes her and Alice out of a sticky situation to the academy.

"Alice leaned into me, her voice low. "He's a guy after your own heart-overconfident, good looking, and witty. It's like you in male form. "-Megan, Curd, Steel Lily

Avery and Alice learn quickly that the life Aticus Riggs offered her is nothing but a lie. She thought things in Dome Four were bad? HA. Dome Seven wants to use her in worse ways than she could ever imagine. She is blackmailed to do things for information about her parents and then finds out not everyone is who she thinks they are. In the end she might just have to trust her worst enemy if they all want to get out alive.

"Ugly can be wrapped deceitfully in the throes of beauty" -Megan Curd, Steel Lily

So I loved this book. From the very first chapter I was engrossed and HAD to know what was going to happen with Avery. Every time I had to put it down I would get so mad because I just wanted to know how everything turned out.

I absolutely loved Avery. She was the perfect female lead character. She fought the entire way through this book for what she believed in and you can't help but love someone like that. She was also full of snarkiness and sarcasm when needed, which is something I love about most characters. The way she looked out for Alice and Legs also made me love her even more because of all the compassion she had for other people.

Jaxon was someone who caught my attention from his very first appearance. He was a big ball of sarcasm and I LOVE it. He is a tough character and seems to have a "negativity chip" on his shoulder. He has been scarred in life by his dad and has built up plenty of walls because of it. I love his sarcastic side, but when he let's his walls down every so often to show you his softer side: SWOON.

Avery and Jaxon have a lot of hilarious banter go on between the two of them through out the book. They both seem torn about how they feel about each other and constantly battling their emotions because of their scarred pasts. I found myself rooting for them to get together through out this book. I loved that they weren't just forced into a relationship right off the bat like a lot of books do.

This book was fast-paced, and kept me guessing. Every time I thought I had it figured out, I DIDN'T. The book had some plot twists that threw me for a loop several times. I can't wait to see what happens in the next installment, Iron Pendulum. Definitely RECOMMEND it. :)

I also recently just did an interview with Megan and have added a giveaway for Steel Lily if you go here.