Every Wednesday I will be featuring an author that I think you should be watching. I hope to be able to snag an interview with them as well. :)

This week my guest author is Amy Good. I'm talking to her about her book Rooted. Her book is available for FREE on her site www.amicgood.com. Thanks for taking the time you do the interview with me Amy. ♥

Here is a little info about Amy that you kind find on her site: 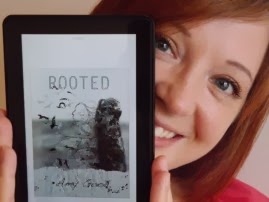 "I am a writer from the U.S. currently living in Dublin. I write part-time, but only when my tyrannical toddler allows it! I also co-created the Story Bandit, a phone/web app that steals writer's block. When I'm not writing, I tweet about the joys and troubles of being a writer, a geek, a toddler mom and a non-native Dubliner. I don't tend to post on a regular schedule so please don't hold it against me. In exchange, I will try not to spam you every time I dopost anything new. I really hope you like what you read and will consider stopping by occasionally!" 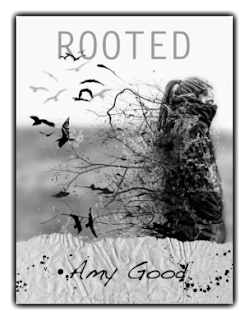 Chloe Chastain is not just an average teenage girl living in the Pacific Northwest. She's also a tree spirit doing her best to avoid the local werewolf pack and not fail her sophomore year of high school. Or get stuck in detention. Again. So when her friend is turned into a werewolf and she attracts a dangerous stalker, Chloe realizes there is more at stake than her permanent record.

READ MY REVIEW FOR ROOTED HERE :)

Q: What made you want to be a writer?

A: I've actually always wanted to write.  I learned to read at a really young age and so I decided (since I loved them so much) I would write books, too.  I mean, there was a brief period of misunderstanding when I was five and I thought you grew up to take on your parent’s job, but thankfully someone set me straight on that!

Q: What was the inspiration behind Rooted?

A: A marathon of MTV’s show Teen Wolf!!  Oh sorry, you probably wanted a more serious answer than that, didn't you?  Okay, well it did come about after a marathon of Teen Wolf, that’s not an exaggeration.  I just knew I wanted to write about werewolves!  And after having my daughter, I found myself wanting to explore how much harder it is to be a teen than when I was that age.  (It’ll probably be even harder for her, too!)  But I also knew I didn't want to write a young-adult version of the Kitty Norville series (by Carrie Vaughn) so I thought of what other kinds of supernatural creatures might live in a shapeshifter’s world.  Around the same time, I had read a news story about an orphaned girl who had been bullied so badly she’d committed suicide, and somehow her story became part of Rooted.  And there are probably a lot of other things that inspired the book that I’m not remembering right now!  Sorry!!

Q: Where did the idea of Chloe's special gifts come from?

A: At the time, I’d just moved from Seattle, Washington to Dublin, Ireland.  I was desperately missing the Pacific Northwest, and that homesickness transformed into Chloe herself.  She’s basically the embodiment of all of my love and longing for my former home.

Q: What made you decide to make Lillian into such a "mean girl?"

A: I don’t know if this happened to you in high school, but it certainly happened to me (more times than I’d like to admit, actually!)…  All too often, I would think of someone as a friend, only to find out later that they were spreading rumors behind my back.
One particular incident from high school really informed the character of Lillian.  Do you want me to share?  Because I’m going to anyway…  Okay, so I was working on a project with a few other people, and I think we were at someone’s house, when – as you do – I started chatting with a boy.  Things took a personal turn, and I casually mentioned how hard it must have been for him.  Of course, he had no idea what I was talking about, so I blurted out something rather personal that his best friend had told me.  He was absolutely crushed, especially when he found out who’d been talking about him behind his back.  That moment perfectly crystallized my high school experience, and I wanted to pay homage to it in Rooted.

Q: What kept you from having more romance in this book?

A: I’m not one to shoehorn romance into a story if it’s not earned.  And yes, I know teens move at a much faster pace than the rest of the world! ;)  But in my mind, Rooted is really about friendship in the end, and it didn’t feel right to clutter it up with a romance too.  Also, if you think about it, Chloe is understandably pretty wary of boys so I didn’t think she’d be rushing into a relationship before getting to know the boy first!  But if anybody out there really needs more romance, they should go here: https://www.youtube.com/watch?v=t1lWDC72QHU

Q: Will we see things possibly develop more for Grayson and Chloe in the next book?

A: I certainly hope so!!  But of course it depends on the story and I won’t push a romance if it doesn’t work.  We’ll have to see! :D

Q: Margot came into the book being haughty and rude, will we get more back story on why she is this way in general?

Q: Can you give us some general information on book 2 and when you plan to have it ready for readers?

A: Unfortunately, it may be awhile before I can have the sequel ready…  It’s just so hard to write a book and take care of a toddler at the same time!  I know… excuses, excuses!!  But one thing I’m doing for my readers is writing some stories that take place in the same world.  They’re totally free and I’ve already posted the first one to my website (http://www.amicgood.com/shortstories.php?id=4&type=1).  Be warned, though: they do contain mild spoilers, so you’ll want to read Rooted first!!

I wish I were a morning person!  My Kiddo wakes up at 6am every morning, and although I drag myself out of bed for her, I don’t feel truly awake until about 10am or so!  Okay, maybe that’s a slight exaggeration.  It’s closer to 11am or noon!! ;)

I just recently found a great-tasting gluten-free pizza that I now crave at all hours of the day so yeah… PIZZA!!

(Fictional boyfriends only) Do you prefer the bad boy or sweet guy?

I’m so boring, I pretty much always choose the sweet guy over the bad boy!  I’m a sucker for men that remind me of my Hubs!!

Thanks so much Amy for being part of Wednesday Watch with me. Best of luck with the second installment.