I'm so excited to be part of Erin's cover reveal today!! I've personally been dying to see what this cover would turn out like since May :-) It came out to be the perfect cover! It's nice and dark which from what I have read is going to represent the book really well. I'm super excited that the Vanguard crest is the main focal point of the cover because it's gorgeous. Let me know what you think about the cover and leave Erin some love. ♥ 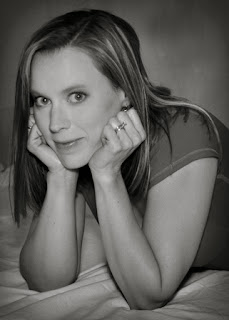 Erin Albert is an author, editor, and fitness trainer.  Since she picked up Morris the Moose Goes to School at age four, she has been infatuated with the written word.  She went on to work as a grammar and writing tutor in college and is still teased by her family and friends for being a member of the "Grammar Police."  In her free time, Erin enjoys acting, running, kickboxing, and, of course, reading and writing. 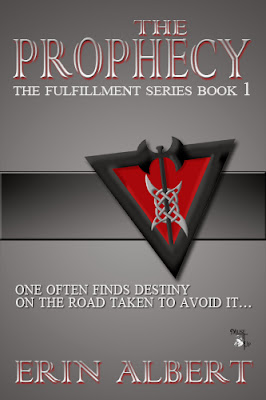 “Everything must be taken down.”  A rotund man, with beady black eyes, surveyed the town, disdain in his expression.  While he did not appear distinguishable from the other black and purple clad men, he spoke with authority. “The First Ones and their great Prophecy must be honored properly.” He sniffed, his actions indicating the very existence of Medlin and its occupants offended him.
Layla wondered what this man considered a “proper honoring” of the First Ones.  The First Ones…they’d been dead for centuries, and, as far as Layla could tell, hadn’t done much in life except start a never-ending war.  She knew nothing more about them except that she was to thank them for good things, curse them for bad, and celebrate them on this day.
“That’s Elder Werrick, head of the Ecclesiastics,” whispered Samson, glancing back at Grant.  Layla noticed the look that passed between them.
Grant nodded his assent. “Get her out of here, brother.”
Samson tried to steer Layla away, but she held her position to get a closer look at the man whom her family so feared. She knew they had good reason to worry—her black hair and purple eyes marked her as a Fulfillment candidate, one with the potential to bring about the long awaited peace. But she couldn’t quite bring herself to believe Elder Werrick would notice her on the crowded streets, especially with her eye drops and hood. Could he really be responsible for dragging candidates from their homes, forcing them to undergo strenuous, sometimes gruesome, testing for the sake of the Prophecy?  To Layla, he looked like nothing more than a short, fat, unhappy man.  The very notion that he could strike such fear into the hearts of her people seemed almost laughable…almost. As his gaze swept over the crowd, she glimpsed a sinister undertone that made her shiver.
Waving his pudgy arms at the awaiting townspeople, Werrick commanded, “Take it down.”
Suddenly, his body stilled and his tiny eyes grew wide.  They briefly connected with Layla’s, narrowing with calculation.  The Elder turned to his nearest black clad companion.
“Do you feel that?” Layla heard Werrick ask.
The other man looked skeptical.  “Feel what, Elder?”
Werrick leaned in as the two whispered, stealing furtive glances in her direction.  When the Elder’s companion pointed at Layla, Samson grabbed her arm. She heard his breathing change from rhythmic to jagged as he pulled her away from the men.
“We have to go now.” His urgency spurred her into action.
Grant moved to block them from the Elder’s view.  “Get her away from here, Samson.”
The Elder looked up to see everyone staring at him as if frozen. He repeated his demand, “I said take everything down.”
The townspeople, joined by the Elder’s minion, scampered to remove their decorations, anxious to “properly” celebrate the First Ones.  Their flurry of activity concealed Layla as Samson and Grant escorted her away.  Layla scanned the streets, horrified, as the people of Medlin stripped the town’s center barren.  In no time, everything appeared as it always had, devoid of any celebratory adornments.  She looked up at the sky with its gray clouds lingering overhead.  A bad omen…
On the hill, a safe distance away, Layla watched a group of Ecclesiastics erect a monstrous stage where the donkey races should have occurred.  She heard the braying of the angry animals, harnessed and corralled on the orders of the Elder to avoid interfering with the “true” Day of Dawning celebration. Her ire rose.  Who did they think they were coming in and changing everything?
An icy, phantom finger traced a frigid line down her spine.  After hearing warning after warning from the Mantars her whole life, Layla knew exactly what the Ecclesiastics could do, what they had done to others in the past.  Maybe Samson and Grant had been right.  Maybe she should never have come, especially today.  Layla turned her back on the town, resolved to go home, to safety.
“Layla!” Samson’s alarmed tone sliced into her, and she swung around toward him.
To her horror, two Vanguard soldiers forced Samson to the ground.  She knew just how much strength he possessed, yet he couldn’t free himself. Her hands balled up into fists, shaking with their desire to unleash the full force of their fury.
“Run!” Samson screamed before a soldier’s fist smashed into his face.
His body stilled.  Panic, coupled with indecision, crippled her.  She should run like Samson commanded, but she couldn’t leave him lying there.  To her relief, Grant ambled toward them, his eyes full of rage.
“Run!” Grant echoed Samson’s warning.
With a final glance at the two boys who’d been as close to her as brothers, Layla fled.  She flew down the hill, swinging her head from side to side in alarm.  Ecclesiastics swarmed throughout the city, making a clear escape route difficult to discern.
Terror rose within Layla.  Why hadn’t she listened to her family?  She’d been foolish to believe she could sneak around under the ever-watchful eyes of the Ecclesiastics, and that hubris put Samson and Grant in danger as well.  She choked back a sob.
“Run,” she whispered.
Willing her feet to move forward, Layla darted toward the back of the baker’s shop, hoping to take a shortcut through the back alleyway.  She swerved to miss a wooden box and stumbled, arms flailing to right herself. Unfamiliar hands reached out to break her fall.  Once stable, Layla looked up to find Elder Werrick staring down at her.  She screamed but no sound came out of her open mouth.
“I’ve been looking for you,” he said, a wicked smile on his face.