Paula Stokes asked me to help reveal the cover for her February 2015 release, LIARS, INC. (and of course I squealed in excitement and said a big fat YES!)

Here’s more info about the book from Goodreads:

It all starts with one little lie…
Max Cantrell has never been a big fan of the truth, so when the opportunity arises to sell lies to his classmates, it sounds like a good way to make a little money and liven up a boring senior year. With the help of his friends Preston and Parvati, Max starts a business providing forged permission slips and cover stories for the students of Vista Palisades High. Liars, Inc. they call it. Suddenly everybody needs something and the cash starts pouring in. Who knew lying could be so lucrative?
When Preston wants his own cover story to go visit a girl he met online, Max doesn’t think twice about hooking him up. Until Preston never comes home. Then the evidence starts to pile up—terrifying clues that lead the cops to Preston’s body. Terrifying clues that point to Max as the murderer.
Can Max find the real killer before he goes to prison for a crime he didn’t commit? Paula Stokes starts with one single white lie and weaves a twisted tale that will have readers guessing until the explosive final chapters.

And now the moment you’ve been waiting for—THE COVER! 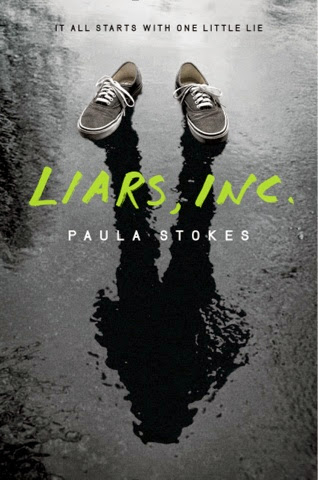 Isn't it all kinds of mysterious and epic?!

OMG, I’ve been flailing about the awesomeness of this cover since April. I saw it and was basically like HOLY COVER LOTTERY!! :D

I’ve talked about how LIARS, INC. is very different from THE ART OF LAINEY, and this cover really highlights that. LIARS has first-person narration, a bit of romance, and similar fast-paced dialogue to LAINEY, but that’s where the major similarities end. This book is a dark mystery for fans of I HUNT KILLERS, PRETTY LITTLE LIARS (the TV show, because I’ve never read the books), or old-school Christopher Pike novels. I hope you love it, because if it does well I might get to write a companion novel, and I’m seriously not ready to let go of these characters. Max is a little aloof and slackerish so it might take you time to warm up to him, but his girlfriend Parvati is totally badass and fun, and both of them really grow and change over the course of the novel. (You know how I love me some character development!) And no worries, this is a total standalone book, plotted and written as a solo novel.

What do you think? Do you like this cover?


Enter the Rafflecopter below for a chance to win a signed, personalized ARC of LIARS, INC.

This is an INTL giveaway provided by the author.

a Rafflecopter giveaway
Posted by Unknown at 6:00 PM