Not long ago I entered a contest held by Adi Alsaid for two signed ARCs of LET'S GET LOST. One was for the winner and the other was for the winner to giveaway on their blog. Well I'm super excited to say that I won but it definitely wouldn't have happened without help from a lot of my amazing Twitter followers and friends! Thank you all who Retweeted, Commented, and Favorited, and even tweeted on my behalf for this contest! I definitely wouldn't have won without you guys. Also wanted to say a huge thank you to Kaitlin from Reading Is My Treasure, who I wouldn't have even known the contest existed without seeing her post about it. Kaitlin was such a big help in winning also that I asked her if she would co-host the giveaway with me! Anyways, to the main point of this post..... 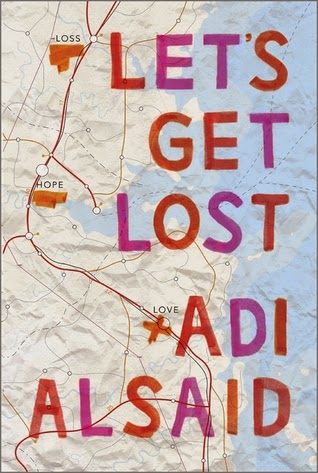 Five strangers. Countless adventures.One epic way to get lost. Four teens across the country have only one thing in common: a girl named LEILA. She crashes into their lives in her absurdly red car at the moment they need someone the most. There's HUDSON, a small-town mechanic who is willing to throw away his dreams for true love. And BREE, a runaway who seizes every Tuesday—and a few stolen goods along the way. ELLIOT believes in happy endings…until his own life goes off-script. And SONIA worries that when she lost her boyfriend, she also lost the ability to love. Hudson, Bree, Elliot and Sonia find a friend in Leila. And when Leila leaves them, their lives are forever changed. But it is during Leila's own 4,268-mile journey that she discovers the most important truth— sometimes, what you need most is right where you started. And maybe the only way to find what you're looking for is to get lost along the way.


Giveaway:
*US Only
*Must be 13+
*All entries will be checked,
if caught cheating you will be disqualified