The Rules for Breaking by Ashley Elston (Mini Review)

**Thank you Disney Hyperion for providing me with an ARC in exchange of a honest review.

**WARNING: This is the second book in a series so if you haven't read the first one this may be spoilery for you. 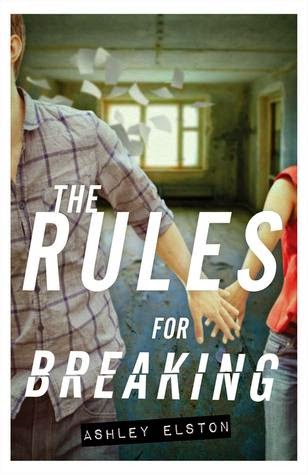 Anna Boyd almost lost her life to get what she wanted most in the world: freedom.But just when it seems that her family has finally escaped Witness Protection, the illusion that Anna could resume a normal life comes crashing down.The deadly man Anna knows as Thomas is still on the loose, and now he's using her as a pawn in a dangerous game with the drug cartel determined to silence her forever. When Thomas and a mysterious masked man capture not only Anna but also her fragile younger sister and her boyfriend, Anna decides it's time to break all the rules-even if it means teaming up with the lesser of two evils.Anna will do whatever it takes to protect the people she loves and win her life back once and for all. But her true enemies are hidden in plain sight. Before long, Anna will learn that putting her trust in anyone may be the last mistake she ever makes.

I really liked the first installment of this series, THE RULES FOR DISAPPEARING, so I was disappointed when this one kind of fell flat for me. I had a hard time getting into the writing for this story for some reason. The scenes seemed to be rushed sometimes and choppy other times. I also felt like the story could have been so much more but just took the simplest route as possible. Everything that happened seem to have a good solution very quickly and too easily. Ethan and Anna's relationship didn't even appeal to me in this book like the other one.

Now I know it sounds like I didn't like the book, but I wouldn't say that, it just wasn't as angsty as I like my thrillers. Everything was quite predictable and I just don't want that when I read a book in this genre. I want something that keeps me turning the pages like a mad woman trying to figure out what is going on and this just didn't do that. I pretty much knew exactly where this story was going EARLYYYYYY on and even saw the "mystery guy" for who he was right off the bat.

Even with all of these issues I had with the book it was still enjoyable. I wasn't getting stabby with it or anything. The story line was still entertaining enough, just had so much more potential. I really enjoyed Anna and her younger sister's relationship, it was probably my favorite part. I also was intrigued with Thomas. I think it was because he gave a little bit of excitement to the book.

If you are a SUPER fan of THE RULES FOR DISAPPEARING you will probably enjoy this book more than I did. I would definitely give Elston another try if she puts out another book outside of this series.