**Thank you Entangled Teen for providing me with an eARC copy** 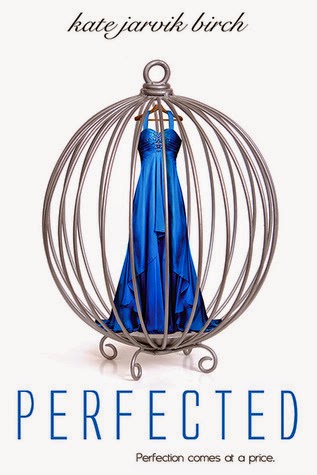 Perfection comes at a price.As soon as the government passed legislation allowing humans to be genetically engineered and sold as pets, the rich and powerful rushed to own beautiful girls like Ella. Trained from birth to be graceful, demure, and above all, perfect, these “family companions” enter their masters’ homes prepared to live a life of idle luxury.Ella is happy with her new role as playmate for a congressman’s bubbly young daughter, but she doesn’t expect Penn, the congressman’s handsome and rebellious son. He’s the only person who sees beyond the perfect exterior to the girl within. Falling for him goes against every rule she knows…and the freedom she finds with him is intoxicating.But when Ella is kidnapped and thrust into the dark underworld lurking beneath her pampered life, she’s faced with an unthinkable choice. Because the only thing more dangerous than staying with Penn’s family is leaving…and if she’s unsuccessful, she’ll face a fate far worse than death.For fans of Keira Cass’s Selection series and Lauren DeStefano’s Chemical Garden series, Perfected is a chilling look at what it means to be human, and a stunning celebration of the power of love to set us free, wrapped in a glamorous—and dangerous—bow.

PERFECTED is a book that I came across when Kaitlin posted about it on twitter. It has a very interesting synopsis so when I was asked if I would like to read this in consideration for a review I reacted something like this:

I was very taken in by the fact that these girls were bred to be pets to the higher society class. It is a very unique spin that I haven't seen before. While I enjoyed this book overall, I found it disappoint me some.

Ella was a very interesting character's head to be inside of. It was like understanding a child without all the hyperactivity. She was new to the entire world, the only thing she knew was the breeding house she grew up in and all the rules she was told she must follow. Ella was very naive, which was expected, and didn't understand pretty much anything going on around her. While that may sound like it would be annoying, it wasn't. The story did a really good job of making me be sympathetic for Ella and understanding why she was like this. The family Ella moves in with has a variety of members. The congressman gave me the creeps completely. *cringes* His wife was kind of a  mystery, I got a sense of what was going on but one thing with her surprised me in the end. The daughter I found to be so sweet and I really did enjoy her character. Their son, Penn, I guess I liked him okay, he was quite the one dimensional character in my opinion so I didn't really feel much about him.

While the story line was really intriguing and I was entertained through out the entire book, I had some issues with it that I just couldn't look past. One thing that bothered me is that the whole breeding thing wasn't really explained. There were little snippets here and there about it, but nothing really on exactly how it was done or even why really. I feel that was something that was really needed. There was also not a lot of emotional depth going on with this story. Ella seemed to have the biggest range of emotions compared to everyone else, which just didn't sit right with me. It's like I would be in the story when it was about her but as soon as other characters entered the scenes I was pulled out again because I would FEEL like I was reading a book. (I hope that makes sense.) The book all together was also quite predictable in where it was going and what would happen.

I think  my biggest issue probably though was the ROMANCE. Shocker, right? Imagine me complaining about romance in a book! *gasp* But seriously though, as soon as they introduced their son I knew where it was going, which seriously that's fine, but then it happened....that big no-no for me...INSTA-LOVE.

Okay, okay I can see how Ella would have this problem, I mean she's pretty much new to the world and to her emotions so this is definitely a feasible thing for her to feel, but Penn?? NO! It just wasn't believable.. There was no romance build up, in my opinion. I won't go into detail because I don't want to do spoilers but the events that happened in the...eh....probably last 20% in the book just really knocked the rating down for me.

BUT even though I had these complaints I still really did enjoy the read. It was a really fast read and it was entertaining. I'm curious if there will be another one because the ending does leave a cliffhanger, so I assume there will be. Will I read the next one? Possibly so. I might wait to see how others rate it first, get the feel of it a little bit, but it's definitely not out of the question for me.