**Thank you Disney Hyperion for providing me with this ARC copy** 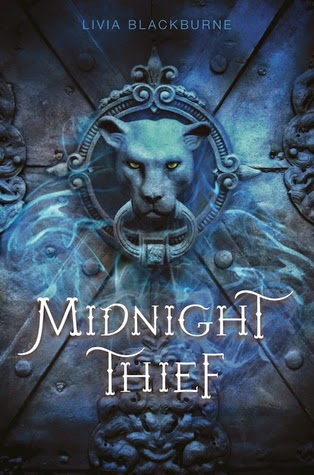 Growing up on Forge’s streets has taught Kyra how to stretch a coin. And when that’s not enough, her uncanny ability to scale walls and bypass guards helps her take what she needs.

But when the leader of the Assassins Guild offers Kyra a lucrative job, she hesitates. She knows how to get by on her own, and she’s not sure she wants to play by his rules. But he’s persistent—and darkly attractive—and Kyra can’t quite resist his pull.

Tristam of Brancel is a young Palace knight on a mission. After his best friend is brutally murdered by Demon Riders, a clan of vicious warriors who ride bloodthirsty wildcats, Tristam vows to take them down. But as his investigation deepens, he finds his efforts thwarted by a talented thief, one who sneaks past Palace defenses with uncanny ease.

When a fateful raid throws Kyra and Tristam together, the two enemies realize that their best chance at survival—and vengeance—might be to join forces. And as their loyalties are tested to the breaking point, they learn a startling secret about Kyra’s past that threatens to reshape both their lives.

Because this book is OUT OF THIS WORLD FANTASTIC!!!!

MIDNIGHT THIEF is definitely one of my favorite books of the year. It is a fun young adult fantasy full of unexpected twists and turns and it kept me engrossed from start to finish. The world building was very vivid and I felt I could see the streets of Forge in my mind. I adored the characters and became quickly attached to them and their well-being. The plot build up was fantastically done; Blackburne pulled the rug out from under me SEVERAL times! There was definitely one twist that even with all my theories for this particular part of the story I never connected the dots to. I think a lot of people will be surprised where this story goes and the ending will definitely leave you wanting the next book.

Kyra and Tristam are my favorite characters in this book. Kyra had a good bit of character development from the beginning of the book until the end and she came out much stronger than she started, and she was already a pretty tough girl.She also got a good bit smarter, she was quite naive at times and especially when it comes to James and the Assassin's Guild. Tristam really ended up surprising me in this story and I really hope to see more interaction with Kyra and him in the future installments, I have certain things I want to happen between these two and I sure hope they do! James was a very complex character and though at times I wanted to wring his neck I still had a bit of a soft spot for him.

(I also want to let everyone know that there is a prequel- that is free at this time- about James, called POISON DANCE. I recently read it and I can’t decide if it’s better to read it before or after reading this book. I think it will change your opinion dramatically of James after you read it. It did mine anyways.)

The fantasy creatures in this book, the demon cats, were a really intriguing part of the story. The demon riders have quite an impact on the things happening in Forge and that part of the story was hands down one of my favorite parts. Blackburne did a really good job going into detail about them and even how the Demon Riders originated. I thought it was very well done.

Now I know most people typically enjoy romance in their fantasy novels, while there is *some* in this novel it did not take over the story at all-which I LOVE. It was actually more of an angst fest which I’m overly obsessed with. Seriously, anything that makes me angsty and anxious for things is awesome in my book.

I seriously can't say enough how much I love this book and think any fantasy reader should give it a try. I've been trying to write this review for a month now and I still just can't express how much I loved it. I feel like this review does it no justice what so ever.