***Thank you Disney Hyperion for sending me an ARC in exchange of a honest review! 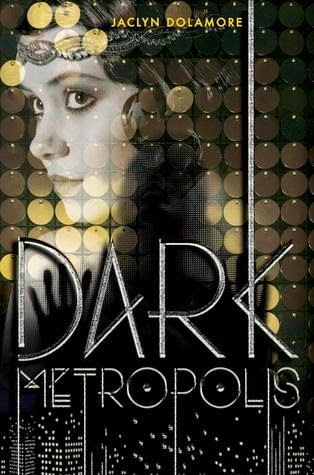 Cabaret meets Cassandra Clare-a haunting magical thriller set in a riveting 1930s-esque world.Sixteen-year-old Thea Holder's mother is cursed with a spell that's driving her mad, and whenever they touch, Thea is chilled by the magic, too. With no one else to contribute, Thea must make a living for both of them in a sinister city, where danger lurks and greed rules.Thea spends her nights waitressing at the decadent Telephone Club attending to the glitzy clientele. But when her best friend, Nan, vanishes, Thea is compelled to find her. She meets Freddy, a young, magnetic patron at the club, and he agrees to help her uncover the city's secrets-even while he hides secrets of his own.Together, they find a whole new side of the city. Unrest is brewing behind closed doors as whispers of a gruesome magic spread. And if they're not careful, the heartless masterminds behind the growing disappearances will be after them, too.Perfect for fans of Cassandra Clare, this is a chilling thriller with a touch of magic where the dead don't always seem to stay that way.

I love historical fiction and the decade this is set in definitely drew my attention. I'm also a lover of mysteries with a little bit of magic sprinkled in and this gave me both! There were several twists and turns that I did not see coming, especially once they figured out what was REALLY happening to everyone, definitely not one of my theories but I enjoyed where the plot went. The first half is a little slower but the second half picks up immensely and it hooked me so much that I know I have to read the next book now. I feel like this is only the beginning to Thea and her friend's stories. .

Thea is the main character who is looking for her friend, Nan, and trying to figure out how to help her mom with "bound sickness" brought on by her father's death. It is a common illness to women bound (magically) to their husbands. Thea is a spunky girl who is very determined to figure out what is going on in the world around her. I really enjoyed her character and the way she handled things along the way. Nan's story line was VERY intriguing, I found out many things about her and it was so interesting to see how things turned out for her in the end. Freddy is a boy Thea meets along the way who happens to be in the center of everything that is going on. I really liked Freddy and his character growth was one of the best parts of the story. There are several villainous characters but I'm going to keep the characters to myself because it adds to the story not knowing. ;P

A few cons I had with this book were though I loved the decade I wish there would have been more reference to it and more vivid visualization. Sometimes it was really hard for me to imagine the setting. I think it would have also helped if the book would have been written in first person. I found it lacking in emotional depth sometimes and it made it hard to connect to the characters and plot. The magic used in the book was really amazing but I would have loved more background on the magic itself and the different magic users. I can only hope there will be more in the sequel. I also found some scenes felt a little rushed.

Even with all that said I still immensely enjoyed this book and I do plan on buying it. I love the cover and want the next book for sure! I have high hopes that the sequel will be even better.

Leave links for your reviews if you have read it :)
Posted by Unknown at 12:00 AM