Every Wednesday I'm going to be featuring an author that I think you should be watching. I hope to be able to snag an interview with them as well. :)

My first guest author is Erin Albert! I'm super excited to be featuring her on the blog. I will be talking with her about recently winning an award and her upcoming book, The Prophecy, set to release November 2013. If you are on twitter and haven't had a chance to talk to Erin, you certainly need to take the time. She is always socializing with everyone when she can, which brings me to one reason why I wanted to feature Erin this week, she just won Bloggy Award's 2013 Most Social Author!!

Here is a little info on Erin:

"Erin Albert is an author and fitness trainer. Since she picked up Morris the Moose Goes to School at age four, she has been infatuated with the written word. She went on to work as a grammar and writing tutor in college and is still teased by her family and friends for being a member of the "Grammar Police." In her free time, Erin enjoys acting, running, kickboxing, and, of course, reading and writing. Her favorite place to be is at home with her family and easygoing tabby cat."


Q: So Erin, you just won the Most Social Author 2013 Bloggy Award! How excited are you??

A: I couldn't believe I even got nominated in the first place. Then, when I went on the site and saw all the amazing authors also nominated, I felt even more amazed. I mean, there were some seriously awesome people nominated. And to win...wow, there are no words. I'm so humbled that people voted for me. So, I want to thank everyone who cast a vote for me. I appreciate your support so much. Being the Most Social Author Bloggy Award winner is beyond words! :)

Q: You have dreamed of writing and publishing a book, but how does it feel since it's actually happening now?

A: I just got my third round of edits, and I still keep thinking I'm going to wake up and find out this whole thing has been a dream. It's surreal. I'm going to go pinch my arm again.

Q: Did you go to college for writing?

A: I originally went to college to be a teacher. My dream was to be a drama teacher, but my parents were SO not on board with that. I chose to be a Communication major instead. Many of the professors in the Communication department also taught in the Drama department. I still got to be in plays and stuff even though I wasn't technically a drama major. When I aced my first English class, in one of the most rigorous English departments around, I decided to look into that degree. I ended up majoring in Communication and working for the English department in their grammar and writing center as a paid tutor.

Q: What is your favorite book genre to read? To write?

E-book or Physical book?
They both have benefits and drawbacks, so either as long as I can read something. ;)

Now that we have learned some general things about Erin, here are some questions about her upcoming book, The Prophecy.

Q: Tell everyone a little bit about The Prophecy.

A: The Prophecy is an epic high fantasy novel about a young woman who is kidnapped and proclaimed the fulfillment of an ancient peace prophecy.

Here is the link if you would look to see more information on The Prophecy's world and characters:
THE PROPHECY--World and Characters

Q: Were the books or characters inspired by anything/anyone in your life?

A: They are not based on anyone in my life, but they are inspired by my love of Game of Thrones and Arthurian legend.

Q: Who is your favorite character in The Prophecy?

Q: How many books do you plan to write along with The Prophecy?

A: The Prophecy has two more books to go with it (tentatively titled The Outlanders and The Fulfillment). In addition to those, I'm working on a futurist thriller called Number 25598. I also have partial stories written for a middle grade fiction novel in the vein of Judy Blume and a chick lit women's fiction story. Waiting in the wings to perhaps one day be published (fingers crossed) is my adult historical fiction novel. ;) I plan to continue writing until my last breath, so I'll hopefully have lots of books by then!


Okay, so here is what I know some of you have been dying to see...I know I squealed when I read it!!! The first look at a mini-blurb from The Prophecy by Erin Albert.


Even though she knew she had no chance to escape now, Layla shoved the Elder with all her might. The blow sent him flying into the baker's door, which splintered under the force, and she darted forward. The Vanguard soldiers moved to block her.
"We are all Vanguards," she pleaded. "Please let me go."
For a moment, they hesitated. Layla used the opening to slip around them. She ran as fast as her legs would carry her, but they proved to be too slow. Within moments, the soldiers leapt upon her, knocking her to the ground. Wrenching Layla up by her hair, they dragged her back to the Elder, whose face now bled from his encounter with the baker's door.
"I see you're going to be trouble." He brushed the dirt off his robes. "You can't escape your destiny, girl."


This image is based on the Ecclesiastical crest from The Prophecy. 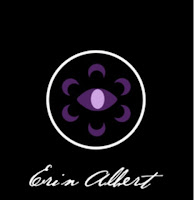 If you want to know more about Erin, visit her blog or follow her on twitter!
http://www.erinalbertbooks.com/erins-blog.html
https://twitter.com/ErinAlbertBooks

Thank you SO much Erin!!! Lurve you!